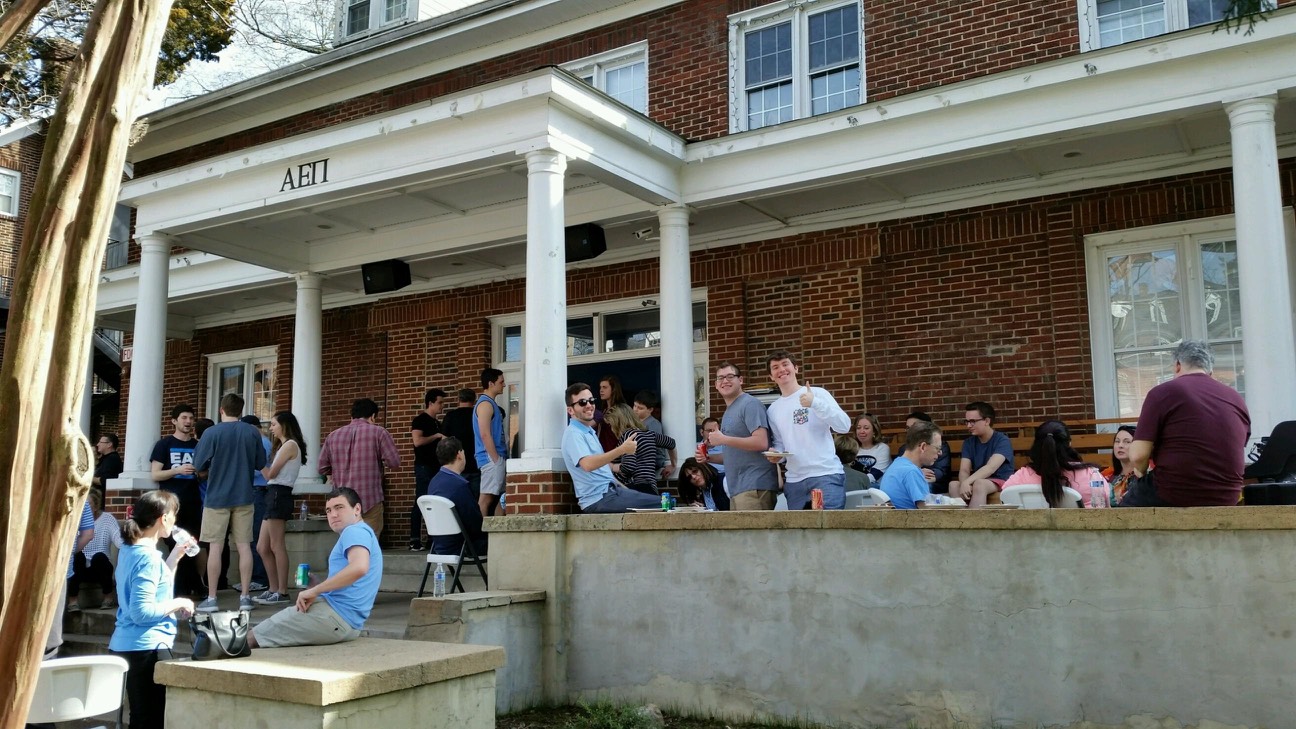 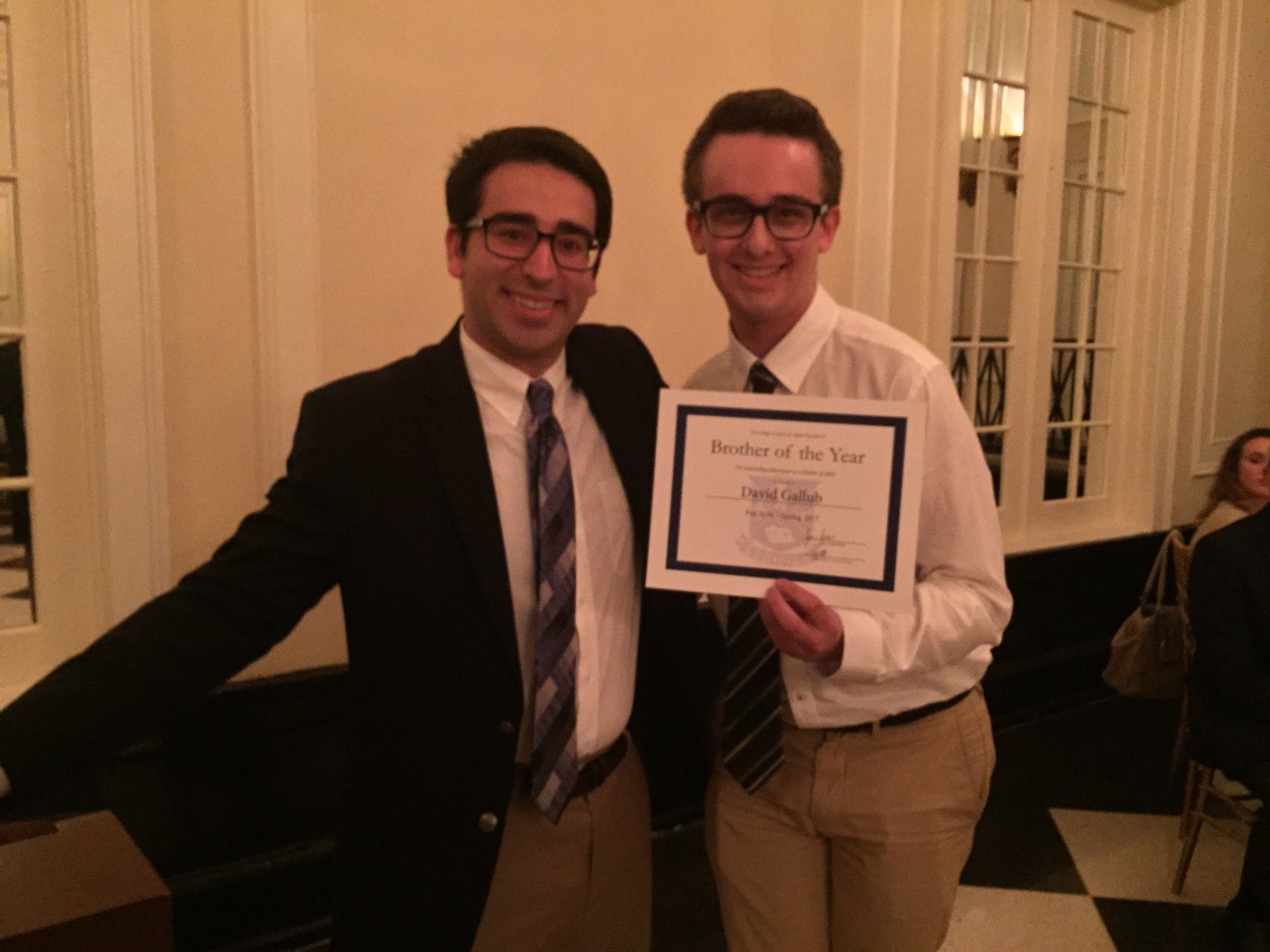 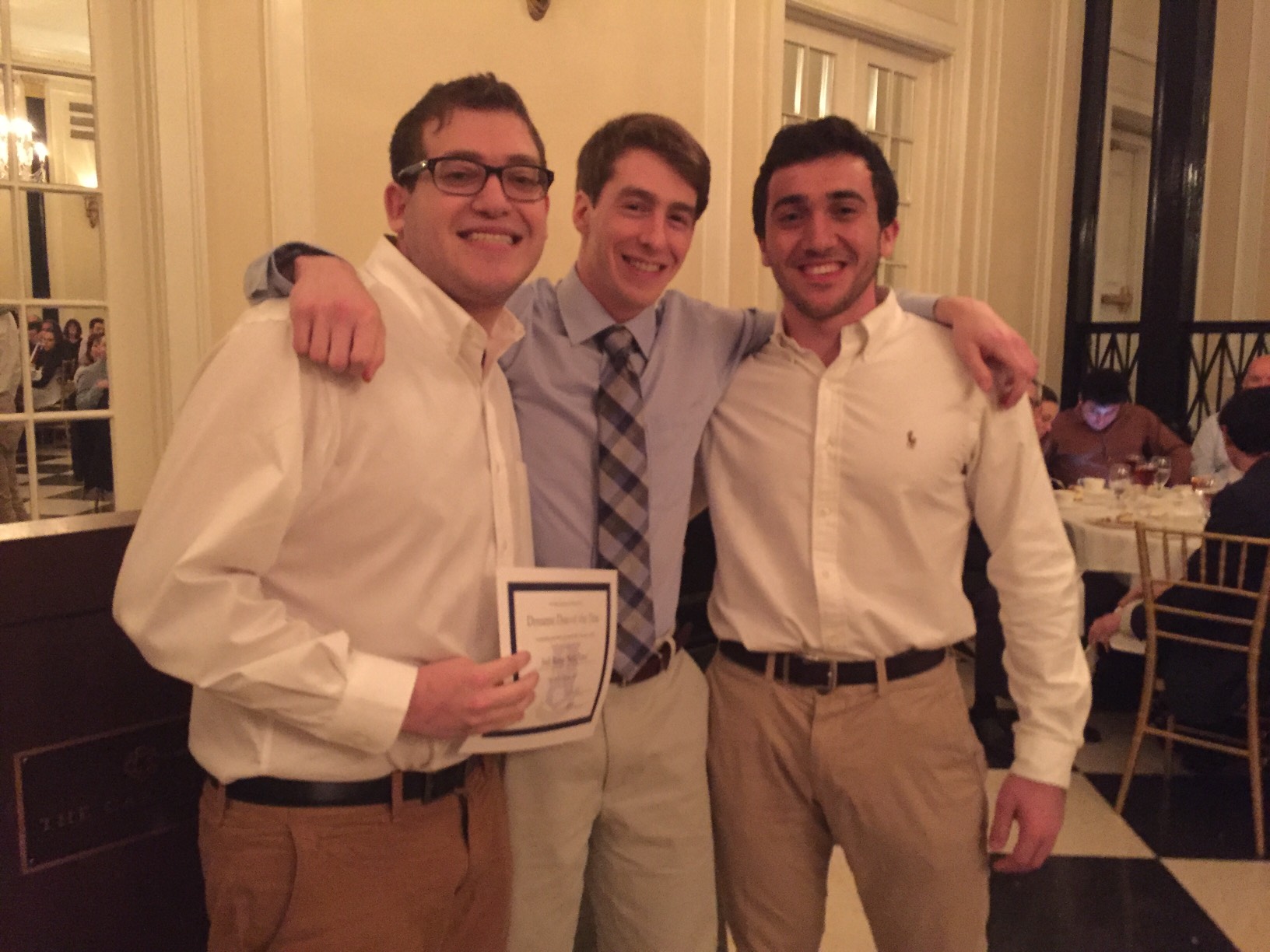 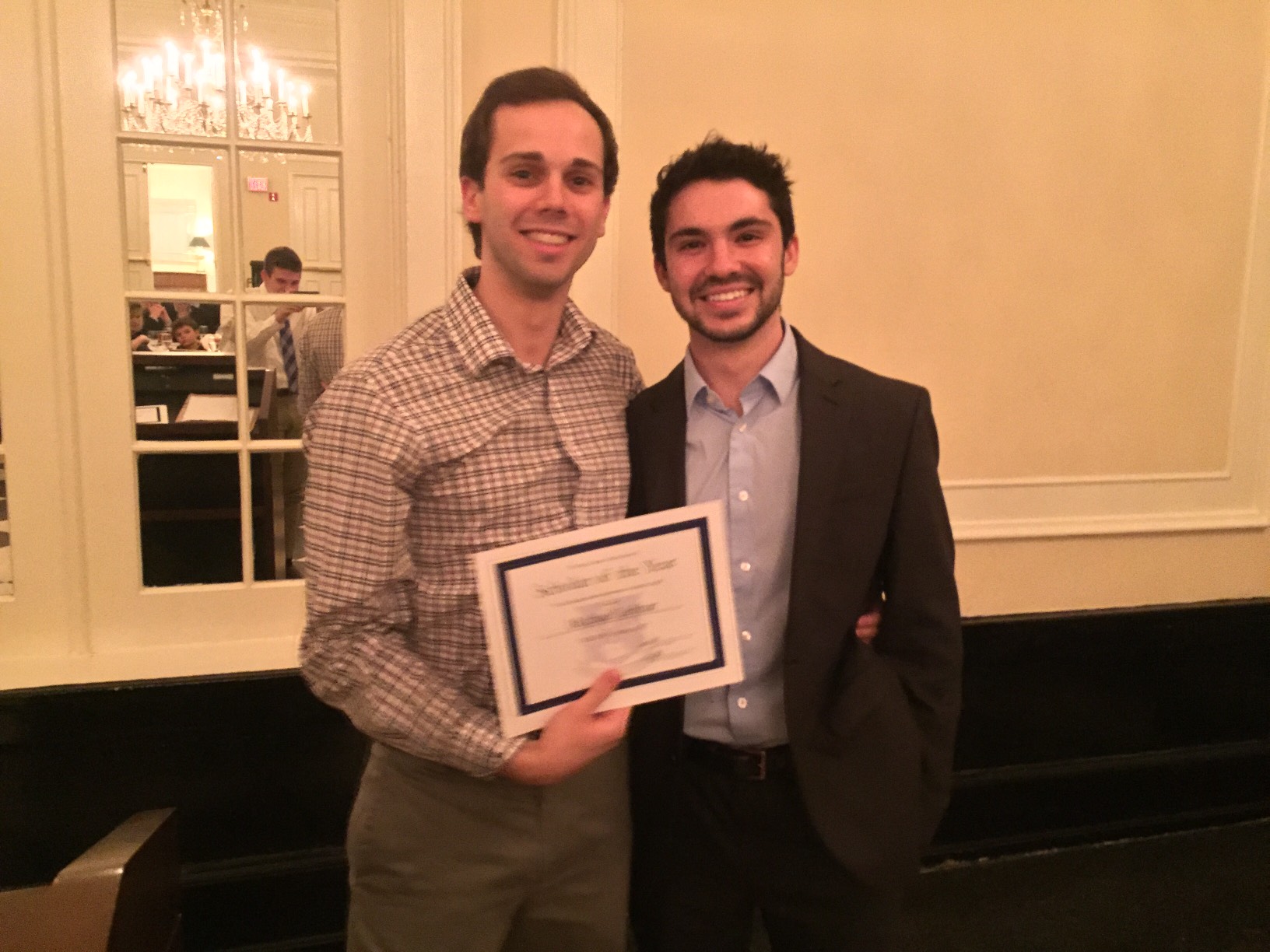 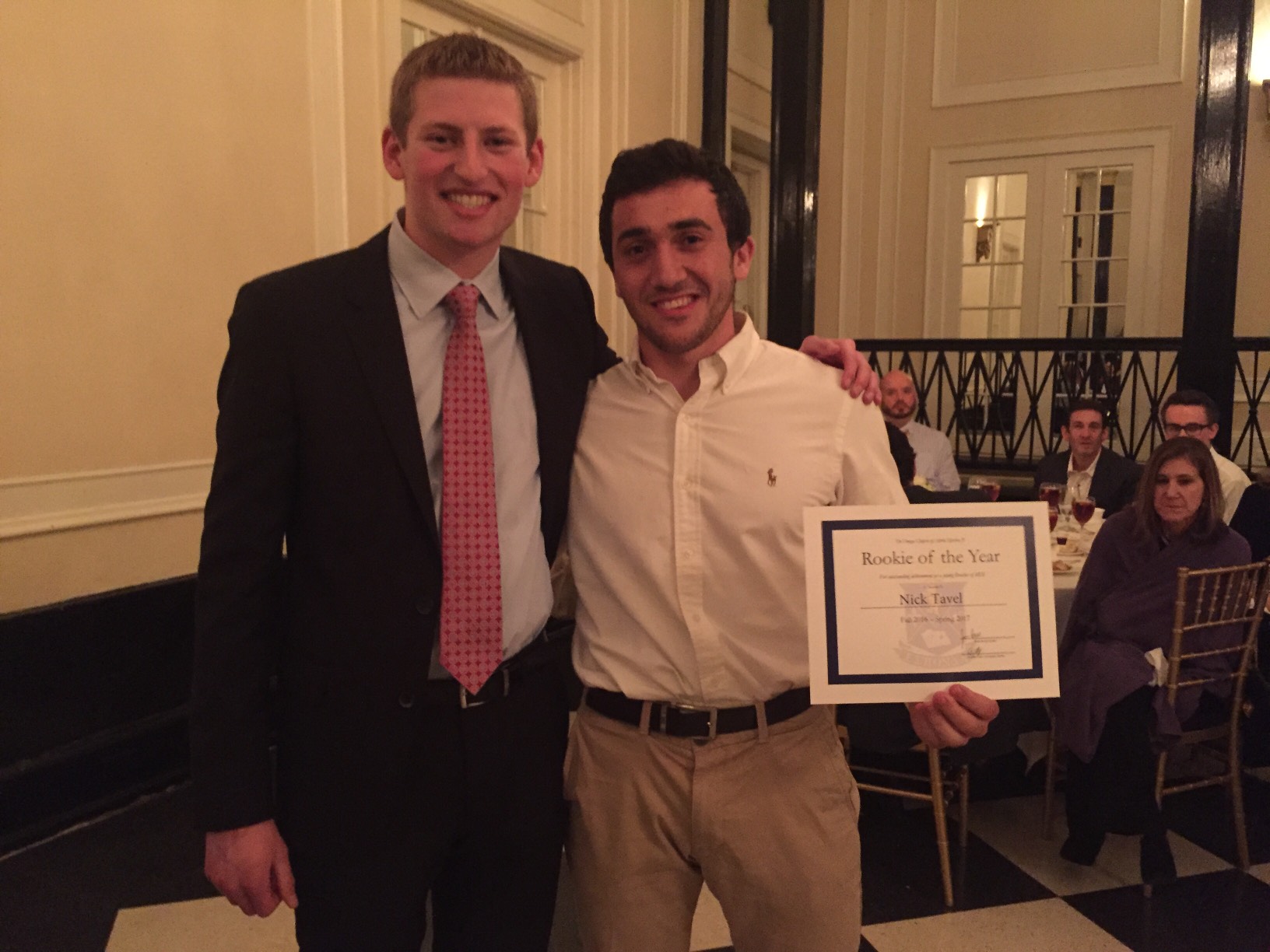 A week ago, our chapter held our annual Executive Committee elections. It is a great honor for all of us to be elected and to serve the fraternity on the Executive Committee. We are pleased to introduce the newest members of our governing board.

Jason is a sophomore from Downingtown, PA majoring in Business with a minor in Philosophy, Politics and Economics. Jason has been on the Executive Committee for a year as Exchequer and is eager to serve the fraternity as President. On campus, he is a member of the Carolina Sports Business Club and is the fundraising chair for the Israel Committee through UNC Hillel.

Avishai is a junior from Chapel Hill, NC double majoring in Applied Math and Physics. He served on the Executive Committee last semester as the New Member Educator and previously was the Parents and Alumni co-chair. Avishai works in UNC’s joint Applied Math/Marine Sciences Fluid Lab, studying simulations of bouncing water droplets and granular materials.

Sam is a sophomore from Chapel Hill, NC majoring in Journalism and Political Science. He was the fraternity’s Parents and Alumni co-chair this past semester, as well as a member of the social and housing committees. On campus, Sam writes for the state and national news desk of the Daily Tar Heel.

Matt is a freshman from just outside of Philadelphia, PA. He currently is majoring in Environmental Sciences and hopes to be accepted into the Biomedical Engineering program. Matt joined our fraternity this fall. He is a member of the UNC Hillel Israel Committee.

Dan is a sophomore from Greenville, NC majoring in Global Studies with a Philosophy, Politics and Economics minor. Dan has served on the chapter’s rush and social committees for the past years. He is the Israel Committee Chair for UNC Hillel and works with the Global Oasis Project, which focuses on providing clean water to communities around the world.

Nick is a sophomore from Bethpage, NY majoring in Business with a minor in Philosophy, Politics and Economics. He is a transfer student from Indiana University and joined AEPi in the fall as the president of his pledge class. On campus, Nick is a member of the Kenan-Flagler Business School’s portfolio management team.

Mike is a sophomore from Philadelphia, PA. He is majoring in Business with a concentration in investment banking, with a minor in Mathematical Decision Sciences. This is Mike’s second semester as social chairman. He manages a small investment fund with several peers and works with a start-up on campus.

Matthew is a junior from Dix Hills, NY. He is a double major in Mathematical Decision Sciences, with a concentration in actuarial science, and Ancient and Medieval History. Last year, Matthew served as the Brotherhood Chair. He is currently studying abroad at the University of Edinburgh in Scotland.

Michael, who served as President last year, will continue to be on the Executive Committee this year as the Past President. He is a junior from Merrick, NY and a double major in Political Science and Interpersonal and Organizational Communication. Michael is a member of UNC Hillel’s Israel Committee.

The Omega Chapter welcomed its alumni on the weekend of November 3rd. We were happy to host a number of our alumni this year and enjoyed seeing old, familiar faces.

On Friday night, we had an alumni dinner at Hickory Tavern in Carrboro, followed by a crawfish boil tailgate on Saturday morning and a UNC football victory against Georgia Tech. 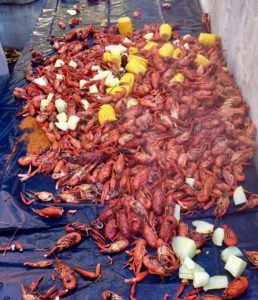 A special shout-out goes to the brothers in the UNC Class of 2016, each of whom pledged to donate to our chapter in honor of Founder’s Day – the 103rd anniversary of the founding of AEPi on November 7th, 1913.

We look forward to seeing our alumni again this spring! Email alumni@aepiunc.org for more information and keep a lookout for the Spring Alumni Weekend date.

Alpha Epsilon Pi is proud to present the Karma for Cara Ice Cream Social on Friday, September 9th at 4:00 in Frat Court. Featuring ice cream and frozen yogurt from Ben and Jerry’s, YoPo, La Vita Dolce, and Maple View Farms as well as cookies from Insomnia, the event will be an enjoyable way to spend a Friday afternoon after a long week of classes.

Tickets will be $5 and shirts will be $20, but you can buy both for $22. If you’re interested, you can purchase tickets and shirts at the door, or in advance from a brother of AEPi. Alternatively, you may email scribe@aepiunc.org to request a shirt and/or a ticket.

The organization that we are raising money for, Karma for Cara, is a foundation that was founded by Cara Becker, the sister of one of our current brothers. She tragically passed away in 2012 after a long struggle with Leukemia.

While many organizations are primarily engaged with fighting Leukemia, Karma for Cara has a slightly different mission. It tries to to promote youth engagement in communities around the country in an effort to help reduce the suffering of cancer patients and their families. To learn more about this incredible organization and the remarkable work they’ve done across the nation please visit http://karmaforcara.org/.

If you are interested in donating, please visit http://aepiunc.org/donate/ and click the donate button on the bottom. Where it says Purpose, please enter Karma for Cara.

We are very excited to host the Karma for Cara Ice Cream Social and are humbled to support such an inspiring foundation. We’re looking forward to seeing as many faces as possible at the event. Please feel free to share this event with your friends. We sincerely hope you’ll be able to join us!

This weekend, AEPi had the pleasure of hosting our families for our annual Parent’s Weekend. As our chapter grows, so do the number of parents and siblings who attend, and this year we saw a record turnout of over 100 family members! We had a lovely Oneg on Friday evening, followed by a formal dinner at the Carolina Inn on Saturday. 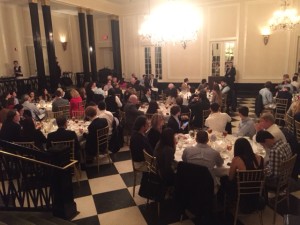 After a speech by our Master, Michael Tommer, we presented this year’s awards:

Brother of the Year: Adam Shapiro, Risk Manager
This award goes to a non-EBoard member, who has contributed the most to this chapter over the past year.

Rookie of the Year: Jason Sewell, Exchequer
This award goes to the most outstanding new member of our Fall Pledge Class.

Executive Board Member of the Year: Michael Tommer, Master
This award goes to an EBoard Member who has gone above and beyond his duties in helping our chapter succeed.

Athlete of the Year: Noah Somaratne, Lacrosse and Basketball
This award goes to our most outstanding athlete from the past year.

Scholar of the Year: Jacob Barach, Business and Journalism
This award goes to a brother who has excelled academically over the past year.

Lifetime Achievement: Jacob Massey, CEO of LineLeader Inc.
This award goes to a senior who has achieved tremendous things as a student and is poised to translate that success into the life outside of college.

Best Big-Little Duo: Kevin Margolin & Michael DeBello
This award goes to the big-little duo who lead this fraternity and are a prime example of what we strive for in assigning our Big Brothers to their new littles.

The Omega chapter thanks all the parents for attending and we look forward to seeing you all again next year!

Another semester is almost come and gone at UNC! While we are happy to get a break from school (especially from Finals), we will still be working hard for our chapter. Once we get back from break in January, we’re going to be jumping right into spring recruitment. The excitement never stops at AEPi Omega, so we thought we’d provide a brief update on what we’ll be working on over our Holiday Break:

Hayden, the House Manager, will be researching new ways to build upon our library and our living room.

Noah, our Rush Chair, will be working to finalize the Rush calendar, so that we’re totally prepared when Spring semester rolls around.

Jonah, our Sentinel, is busy planning out our Formal trip, which will hopefully be headed to the beach!

We hope that everyone has a wonderful Holidays, and Happy Hannukah!

Today we had our weekly visit from Rabbi Zalman. He brought us fresh bagels and our own personal Menorahs, and stayed for an hour to discuss the history of Hanukkah and its place in the world. As always, we love Zalman’s talks and look forward to his next visit! 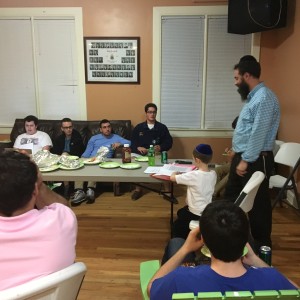 This past weekend we elected our new Executive Committee. These brothers are some of the most committed leaders in the fraternity. They spend countless hours running our chapter, from managing the house to planning social events. It is a great honor to be elected, and we all look forward to another strong year. The Executive Committee is as follows: 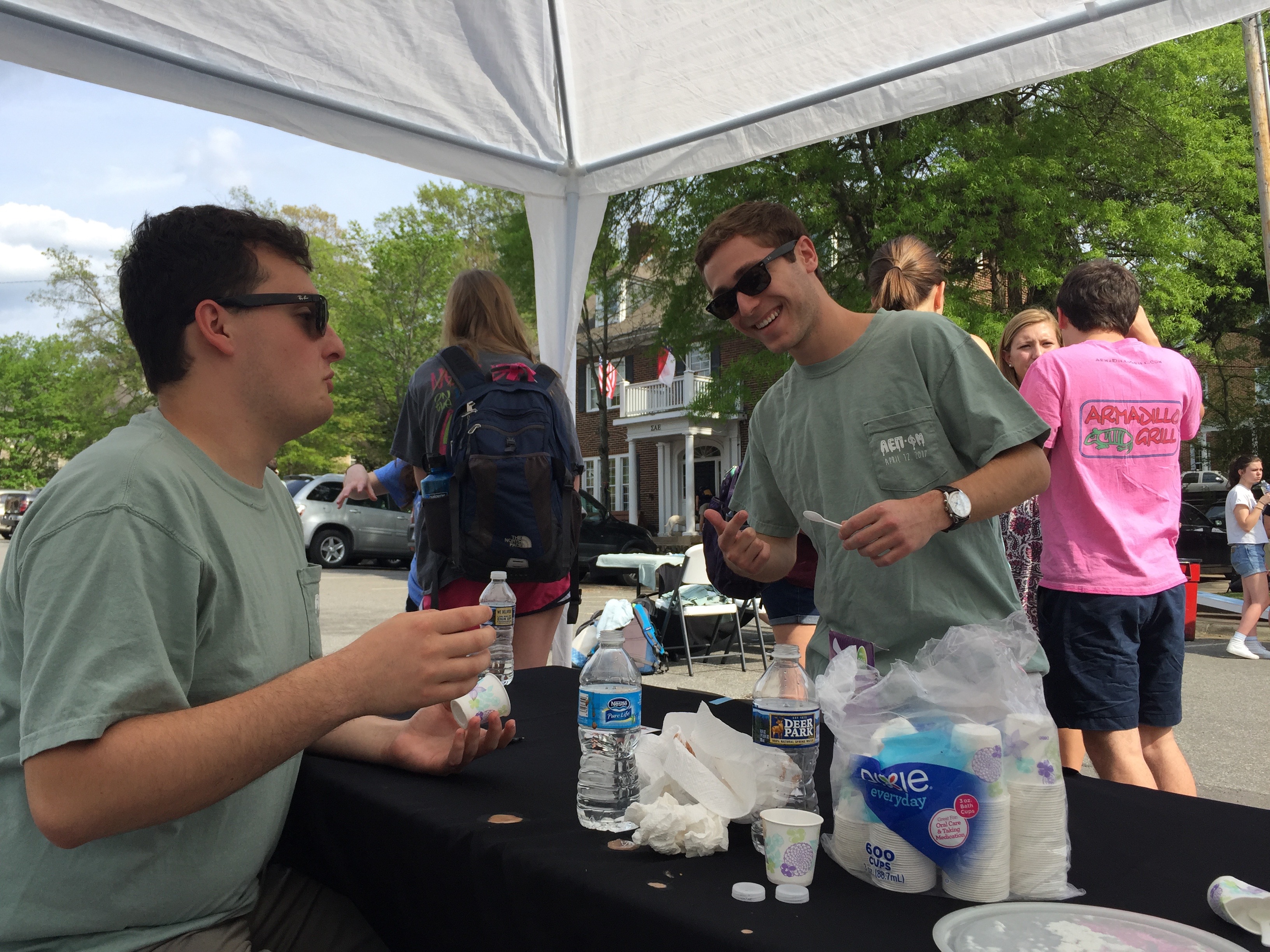 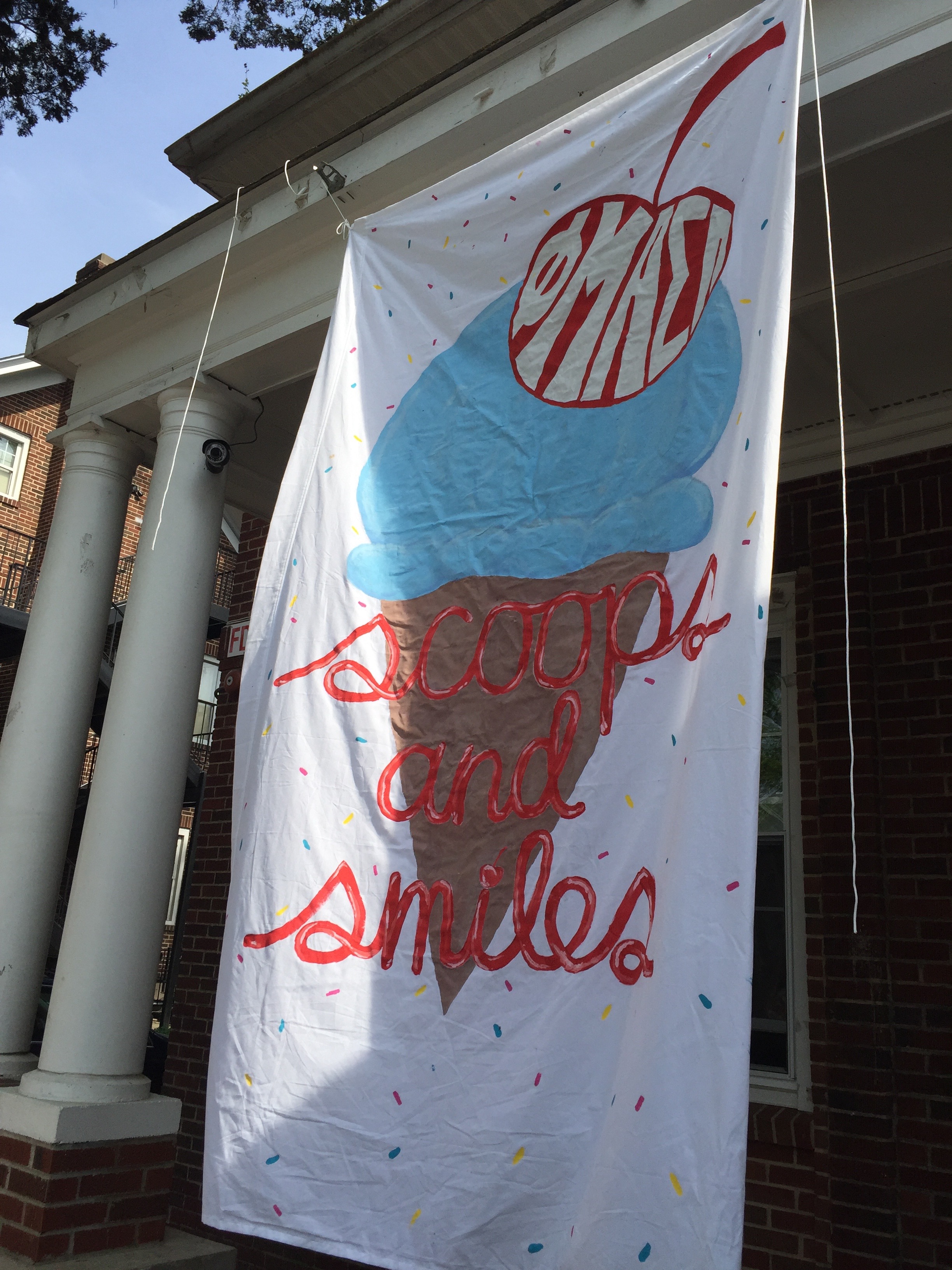 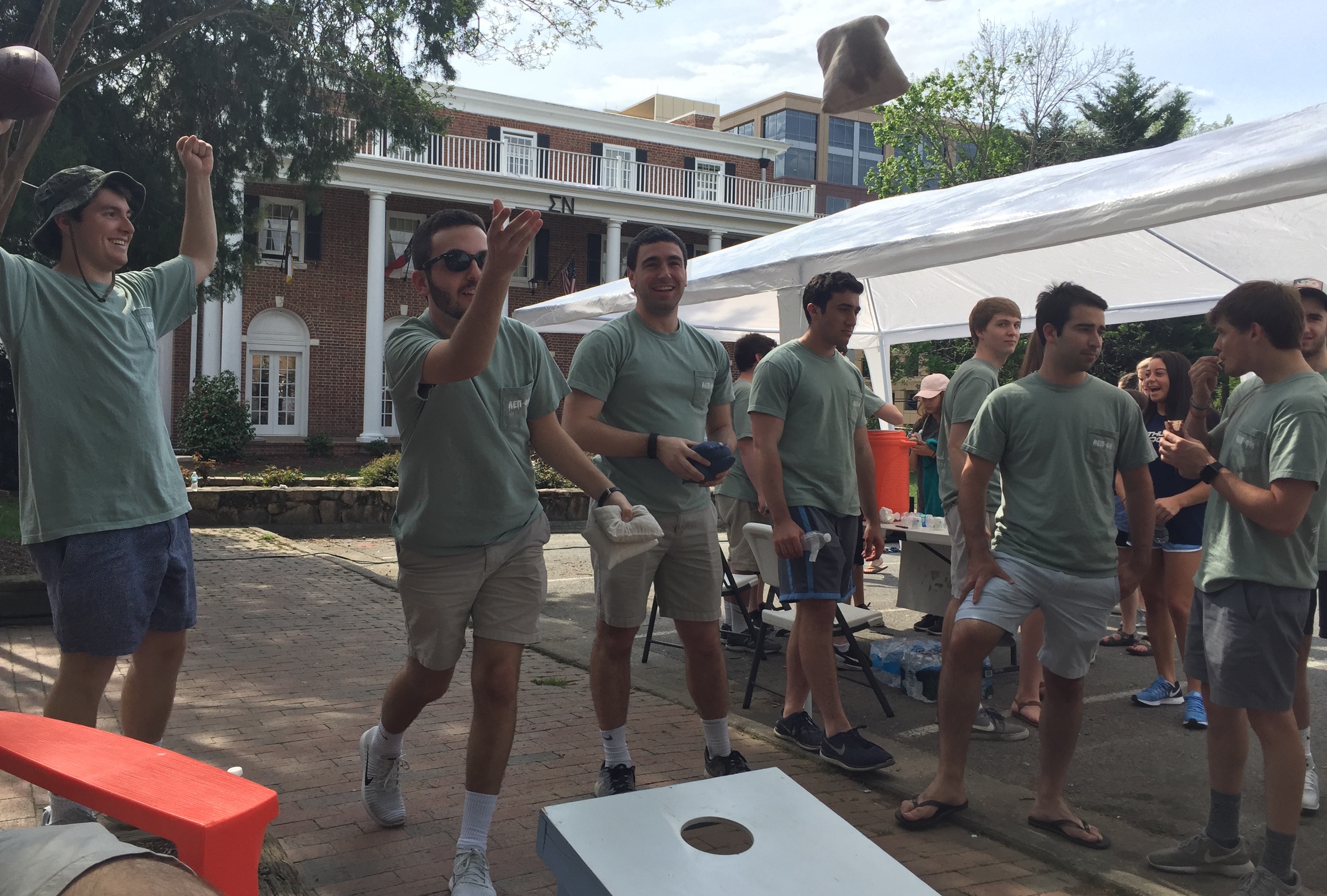 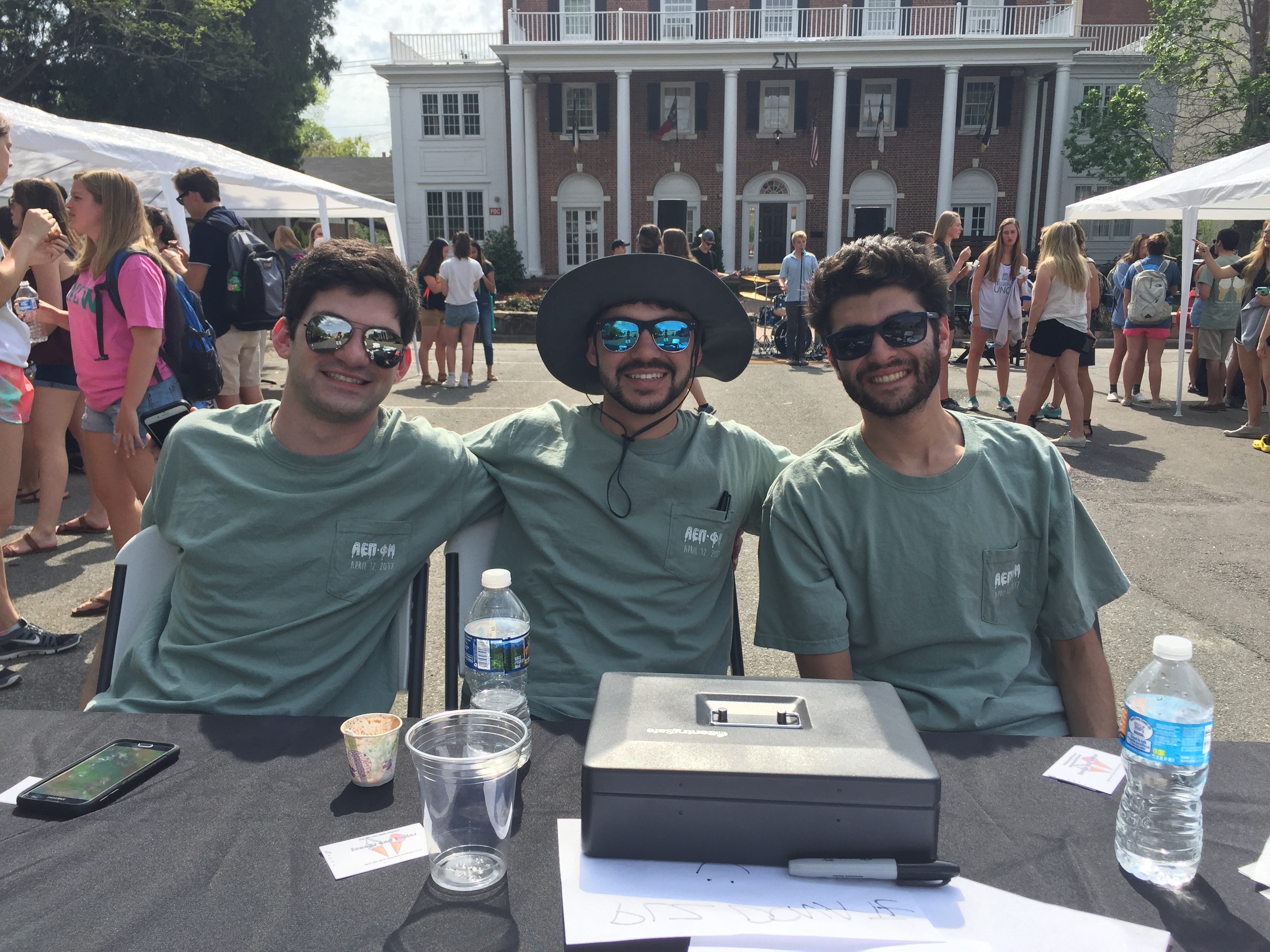 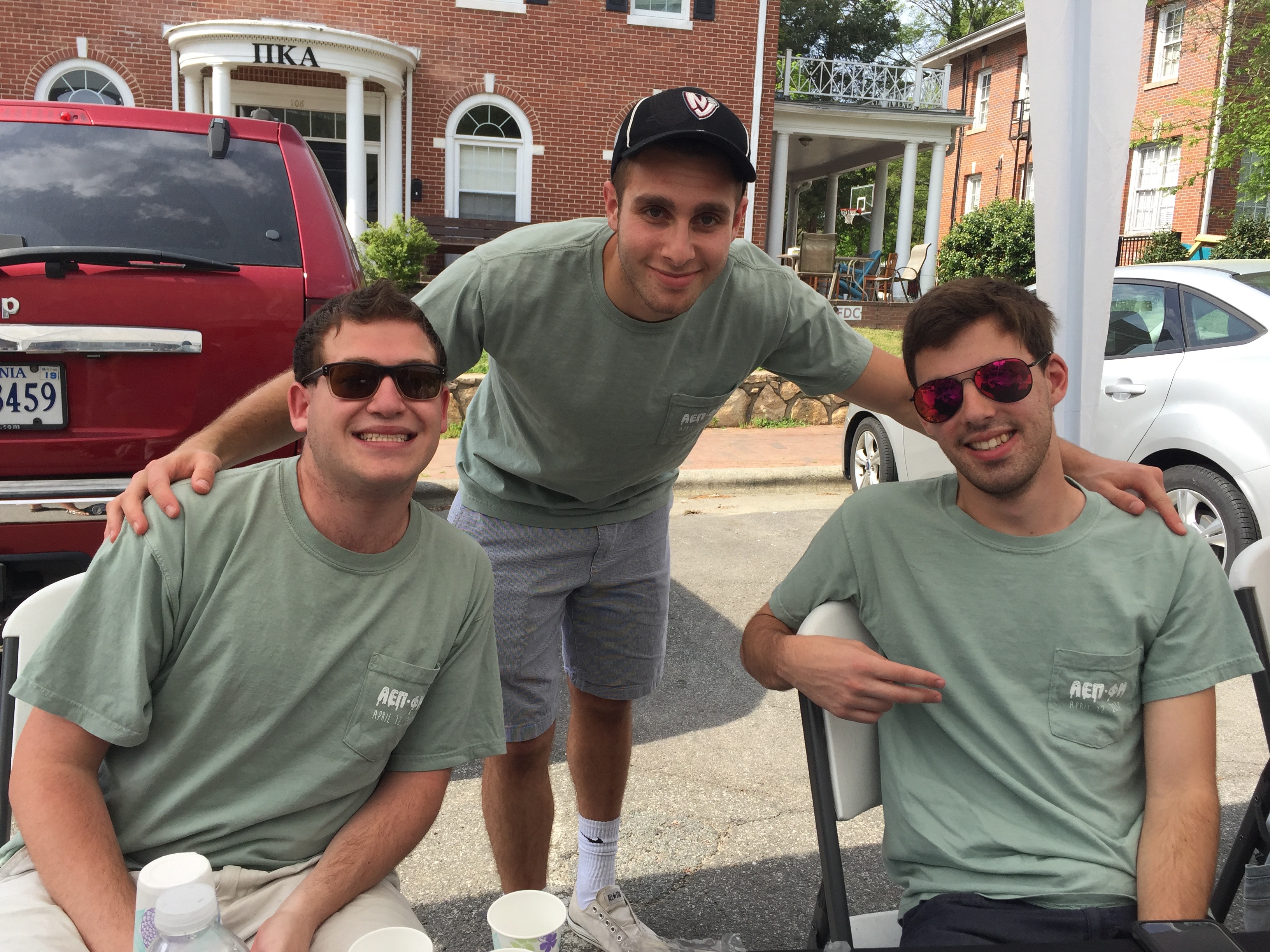 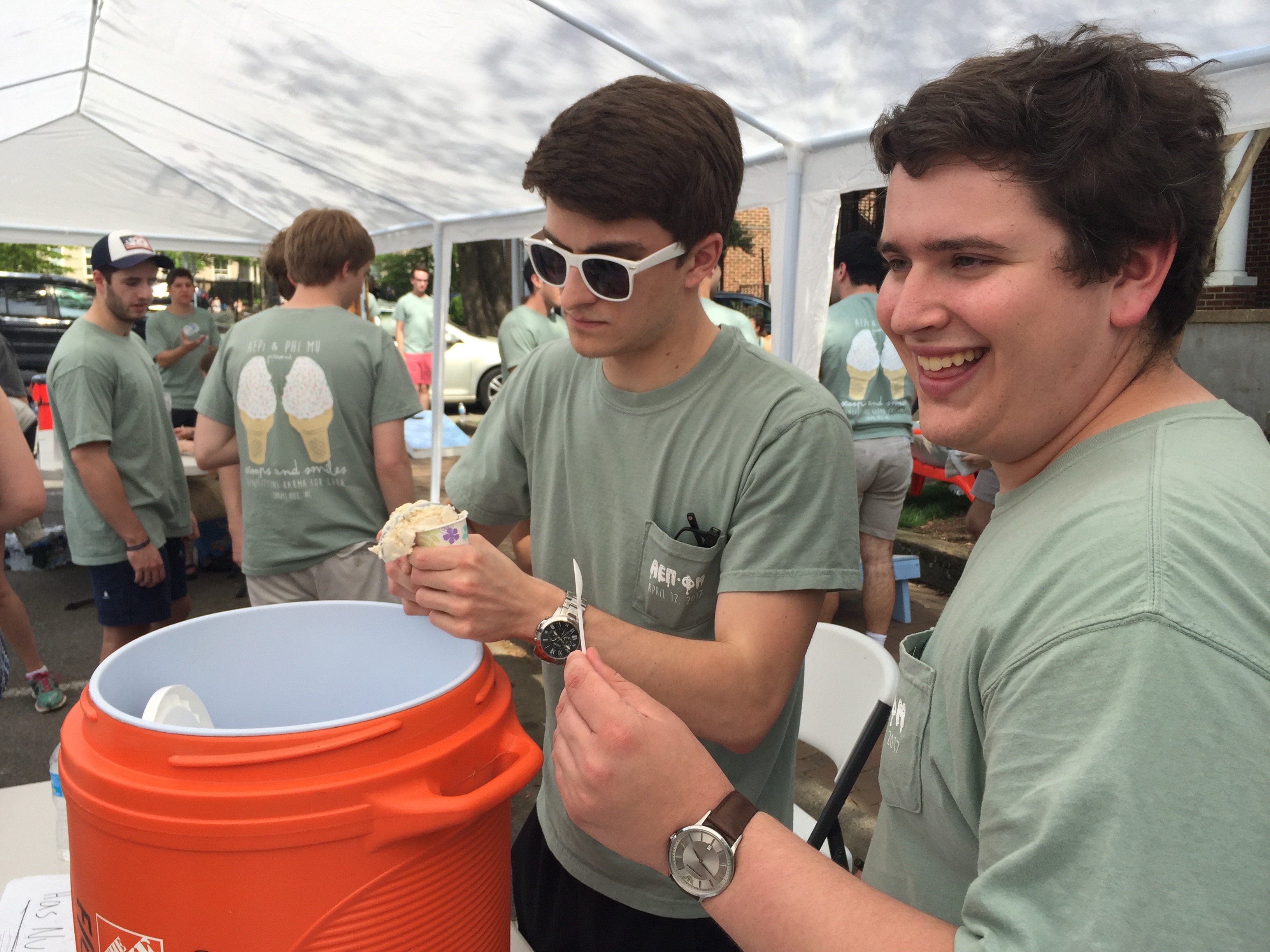 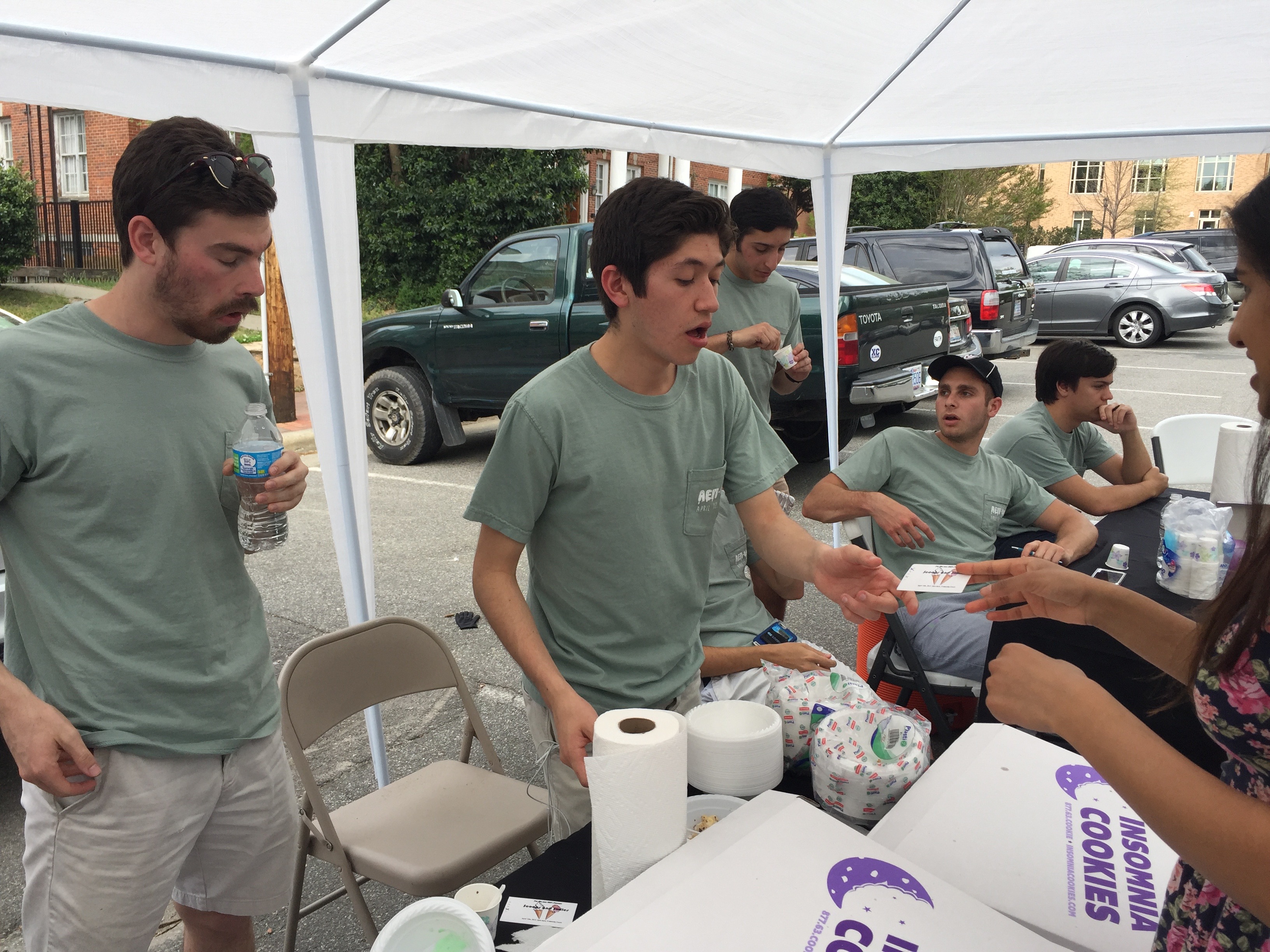 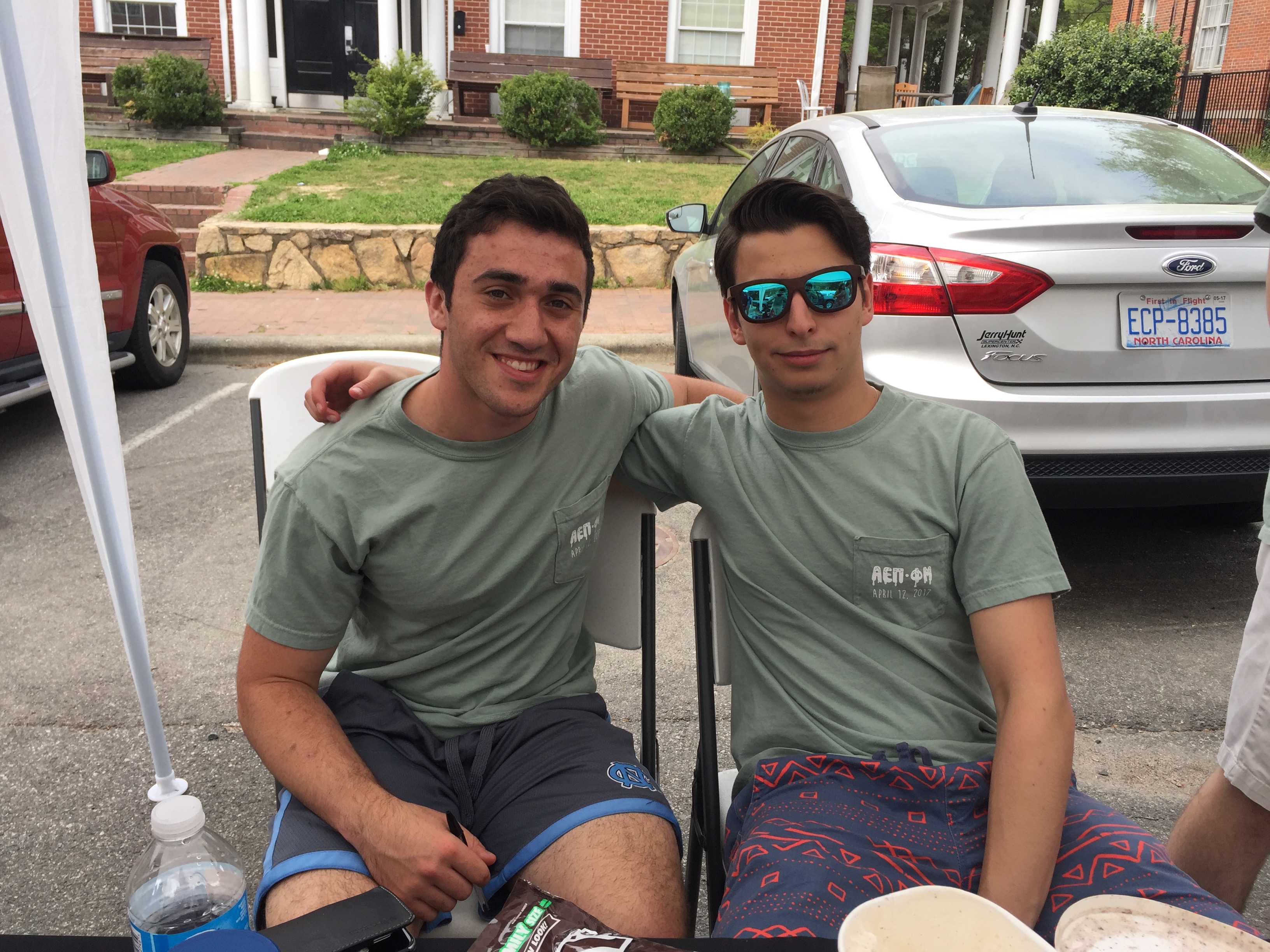 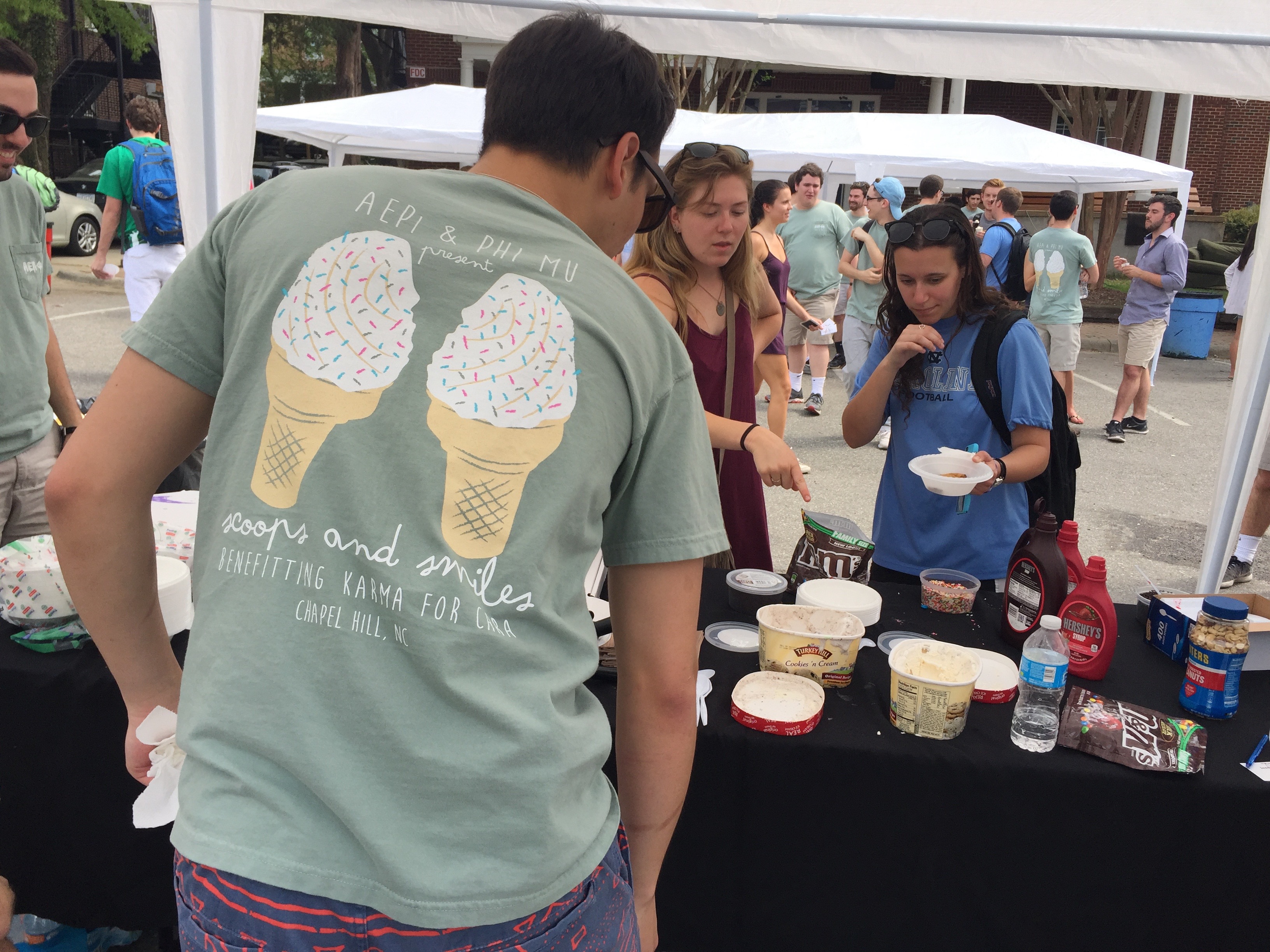 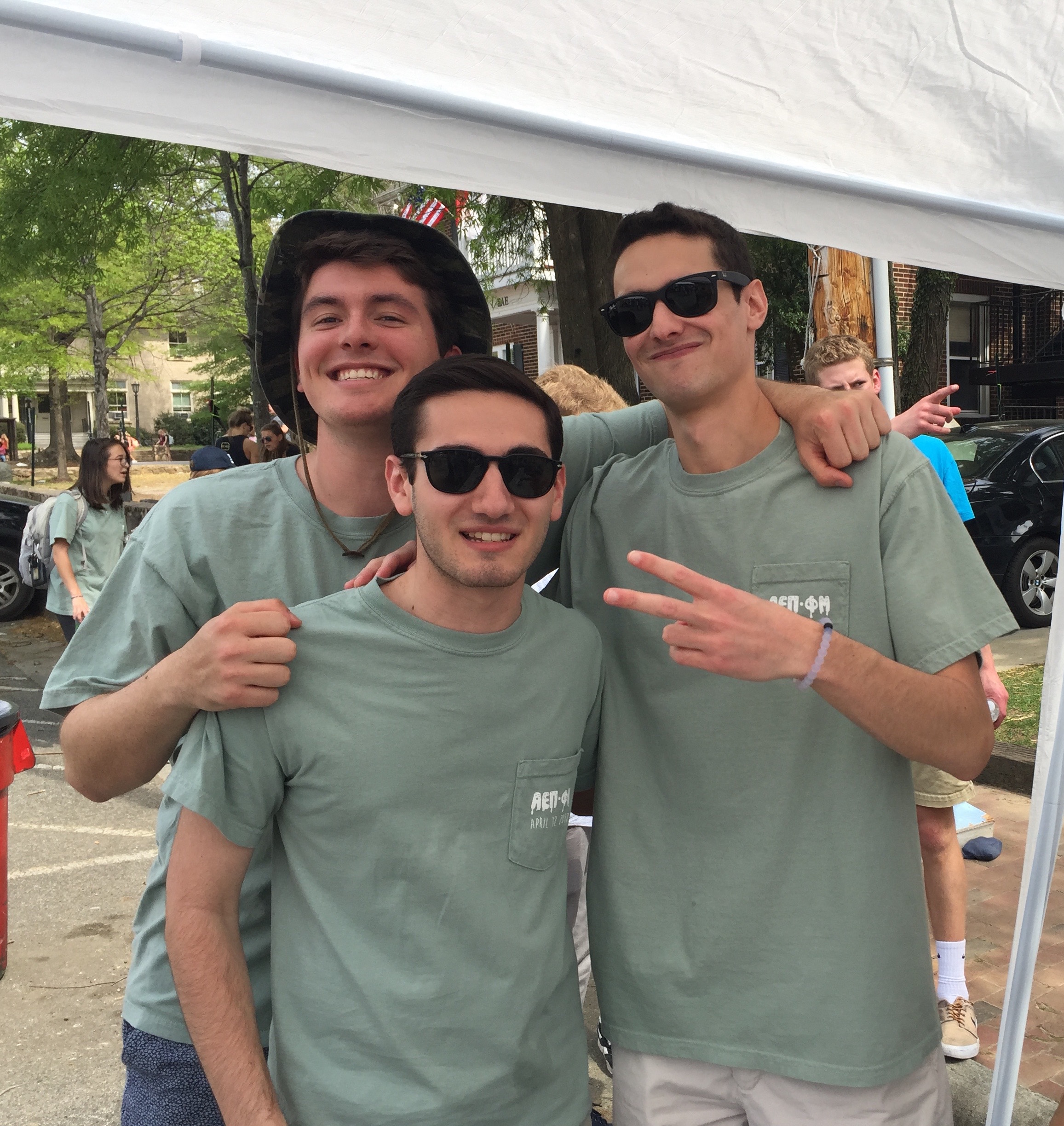 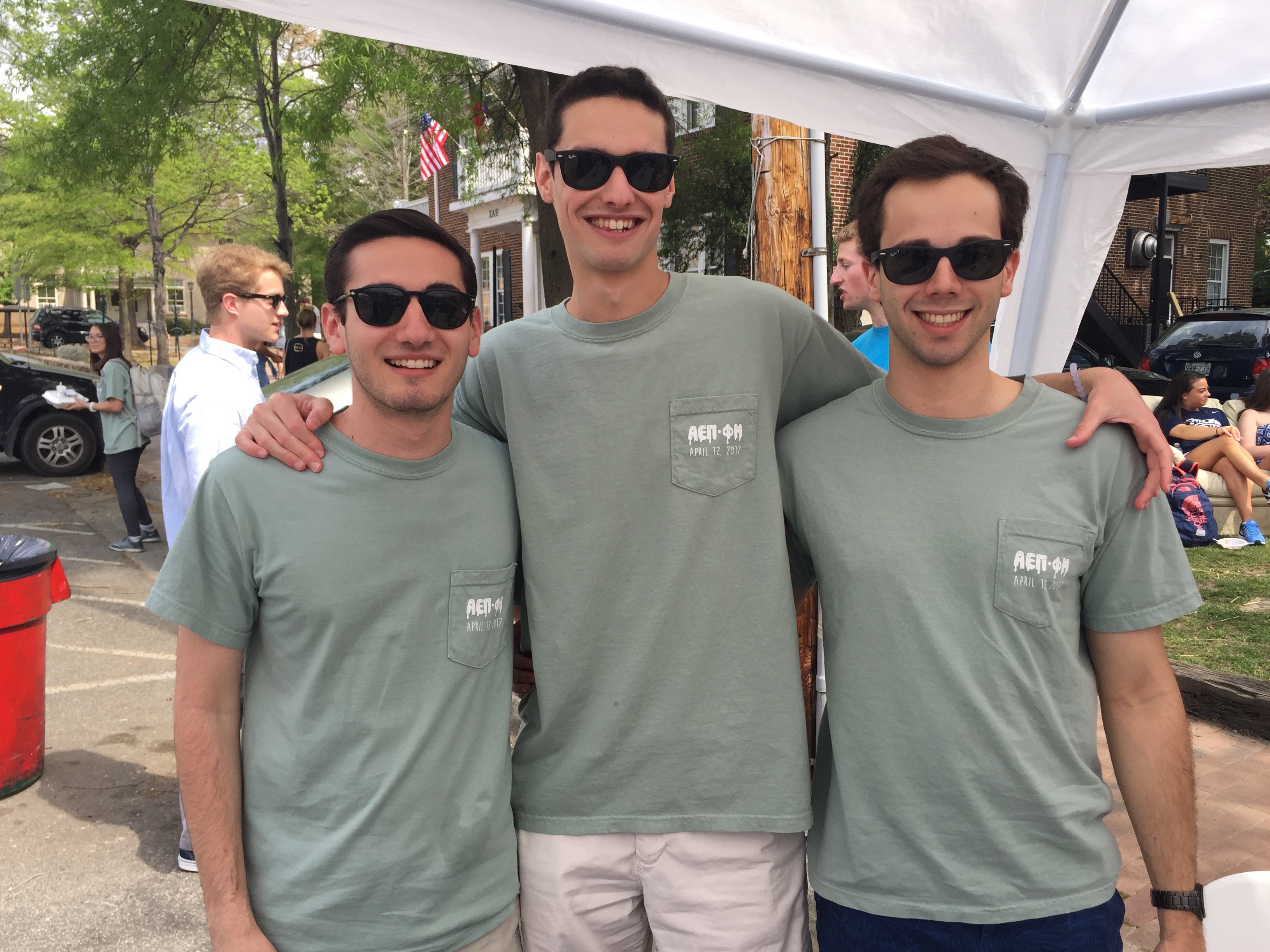 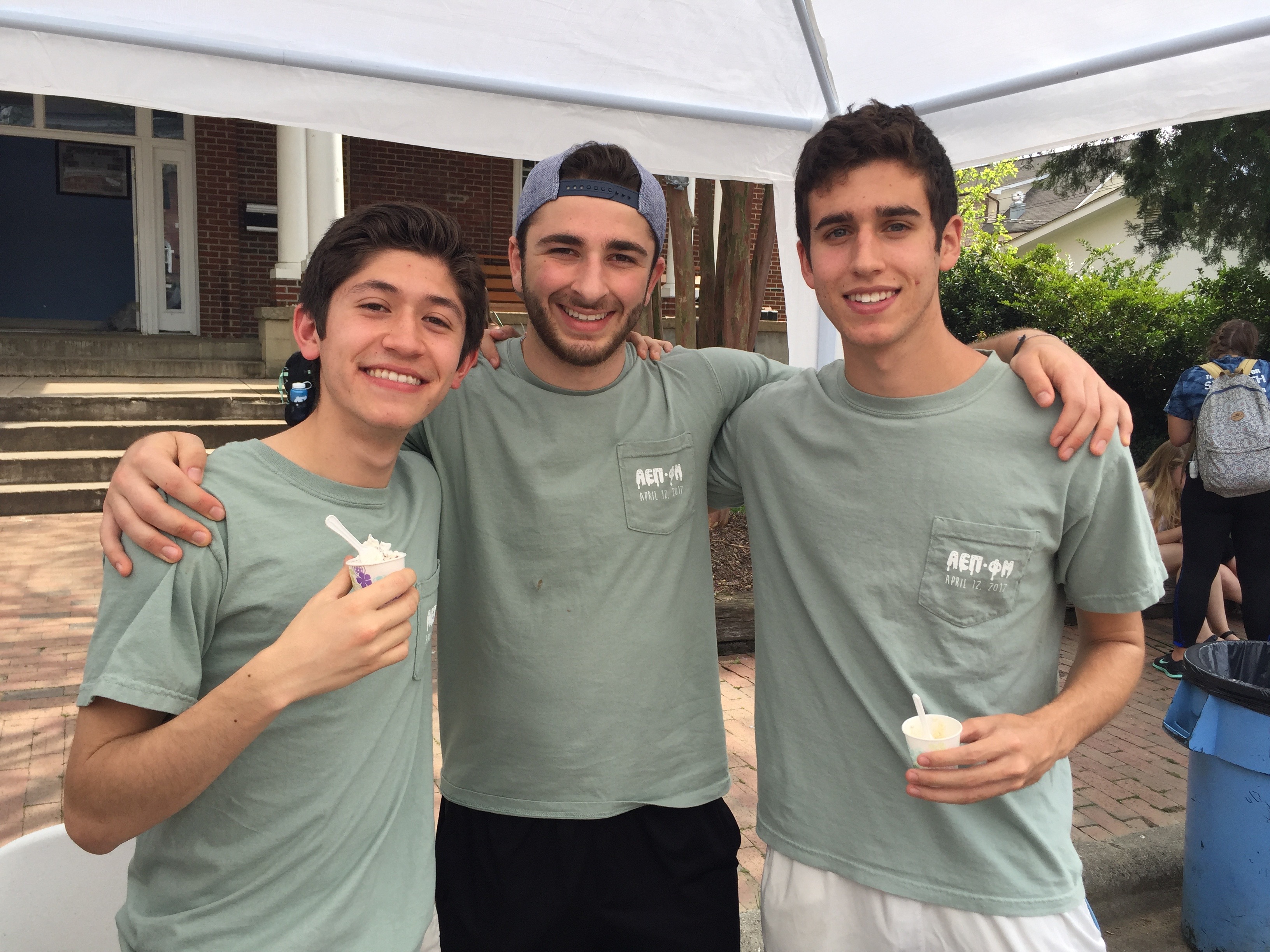 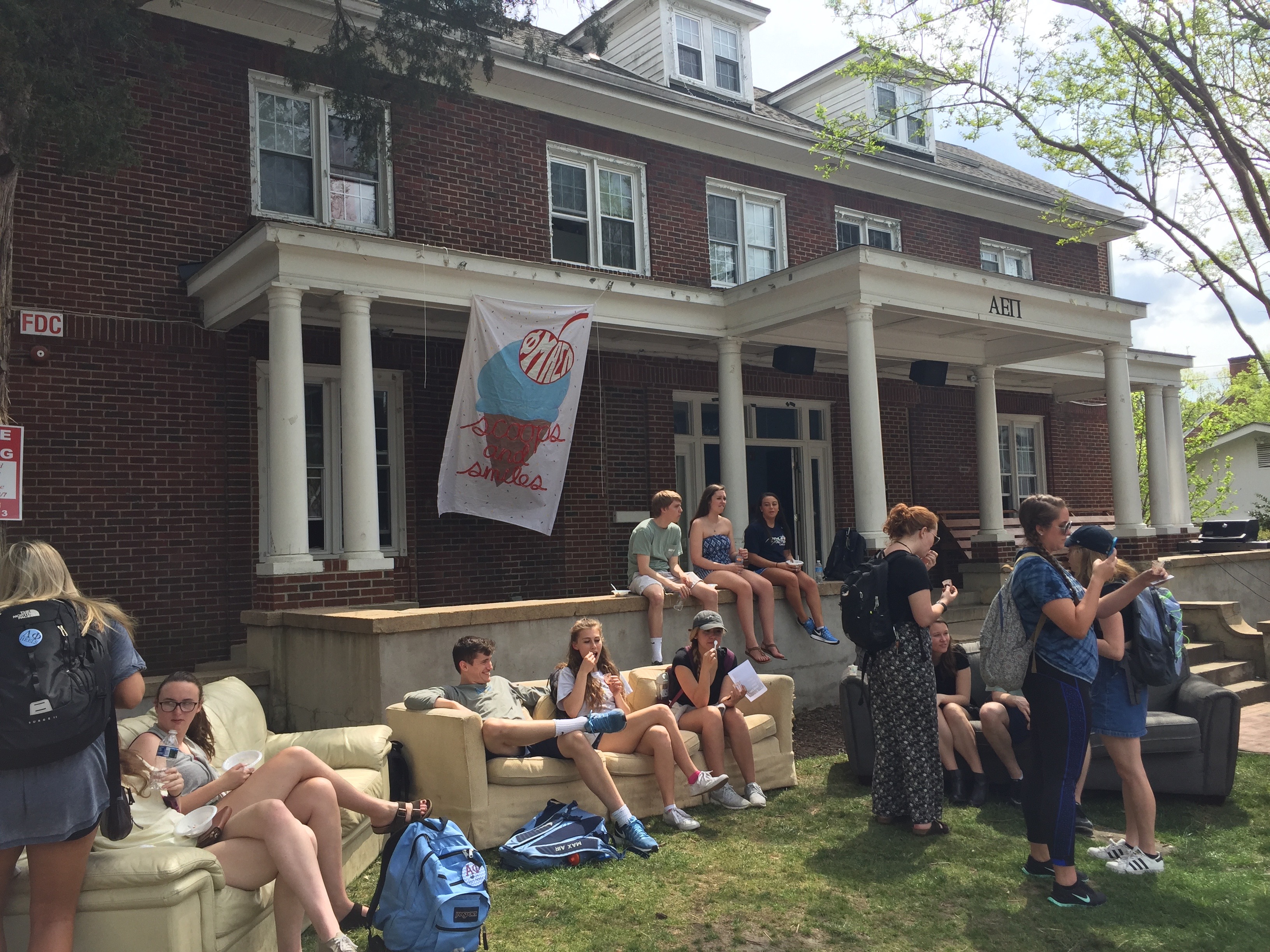 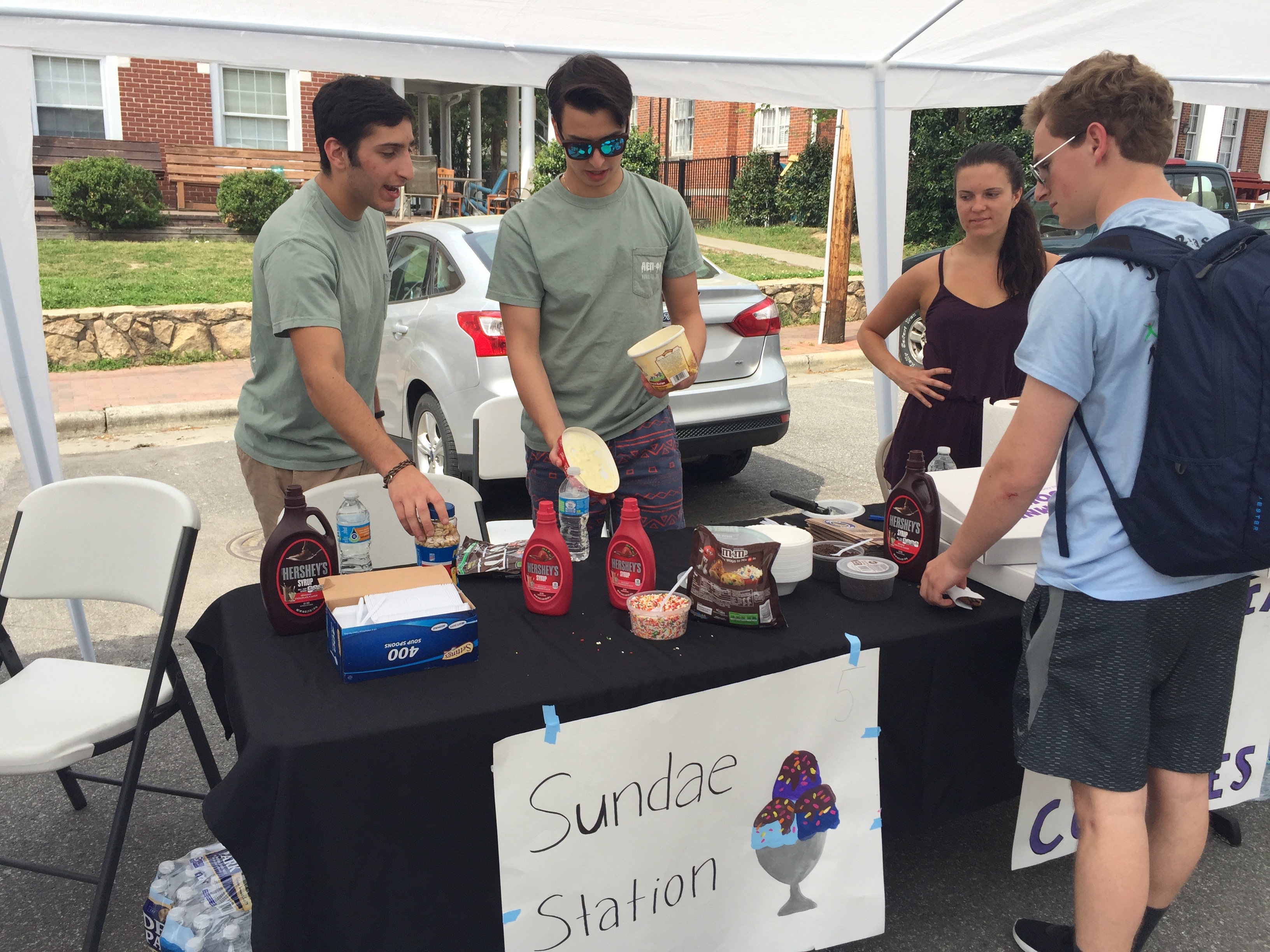 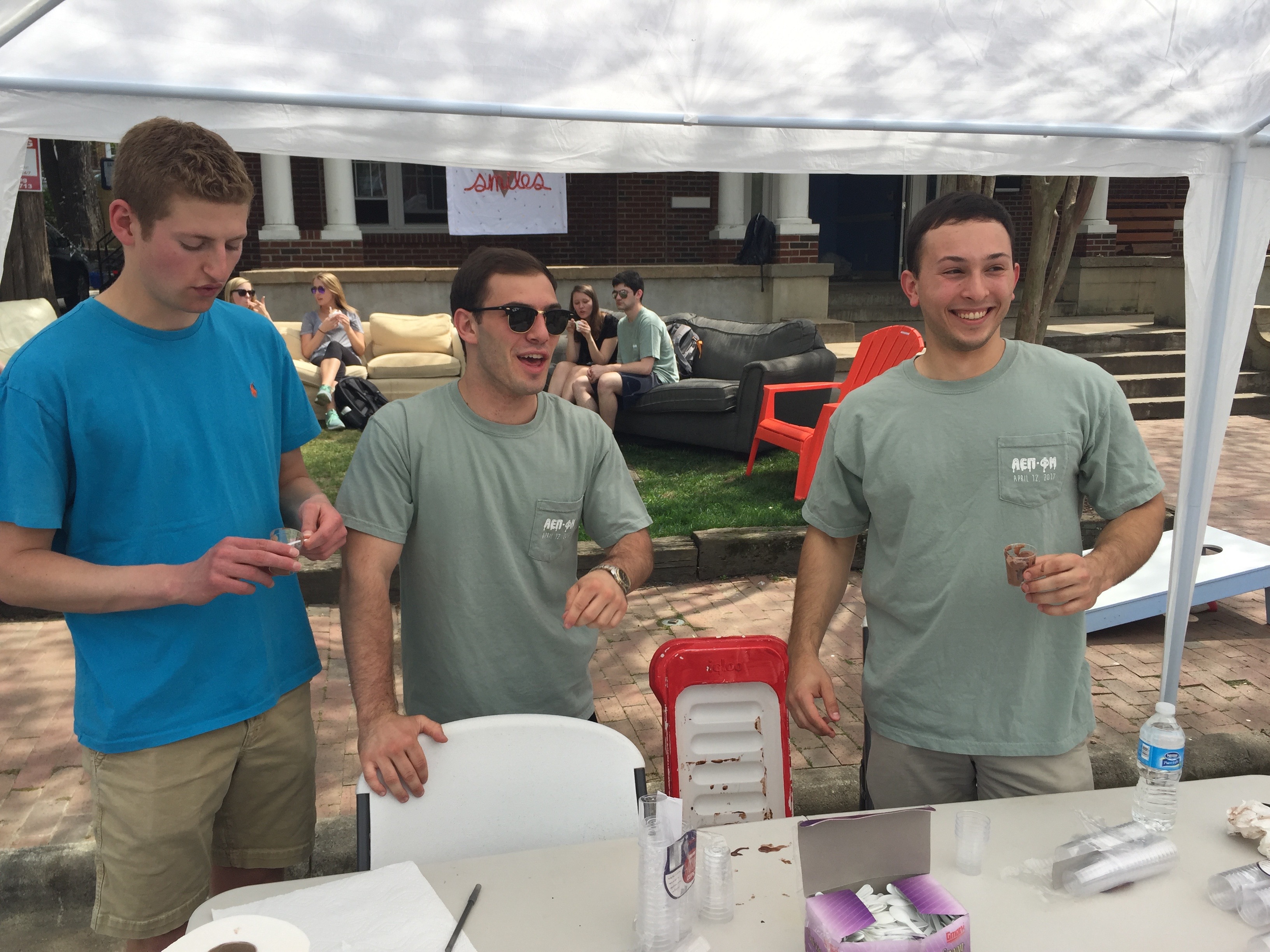 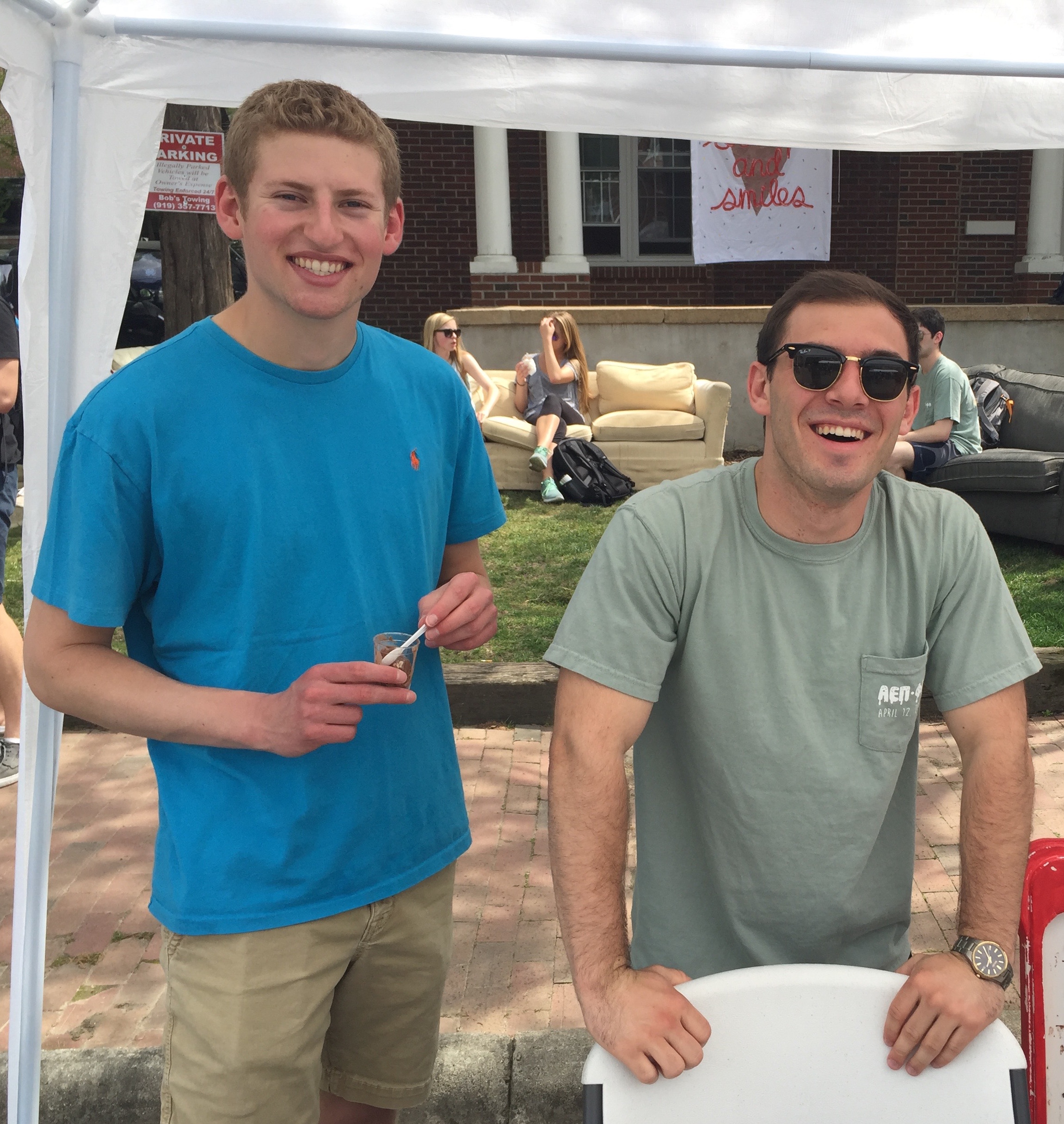 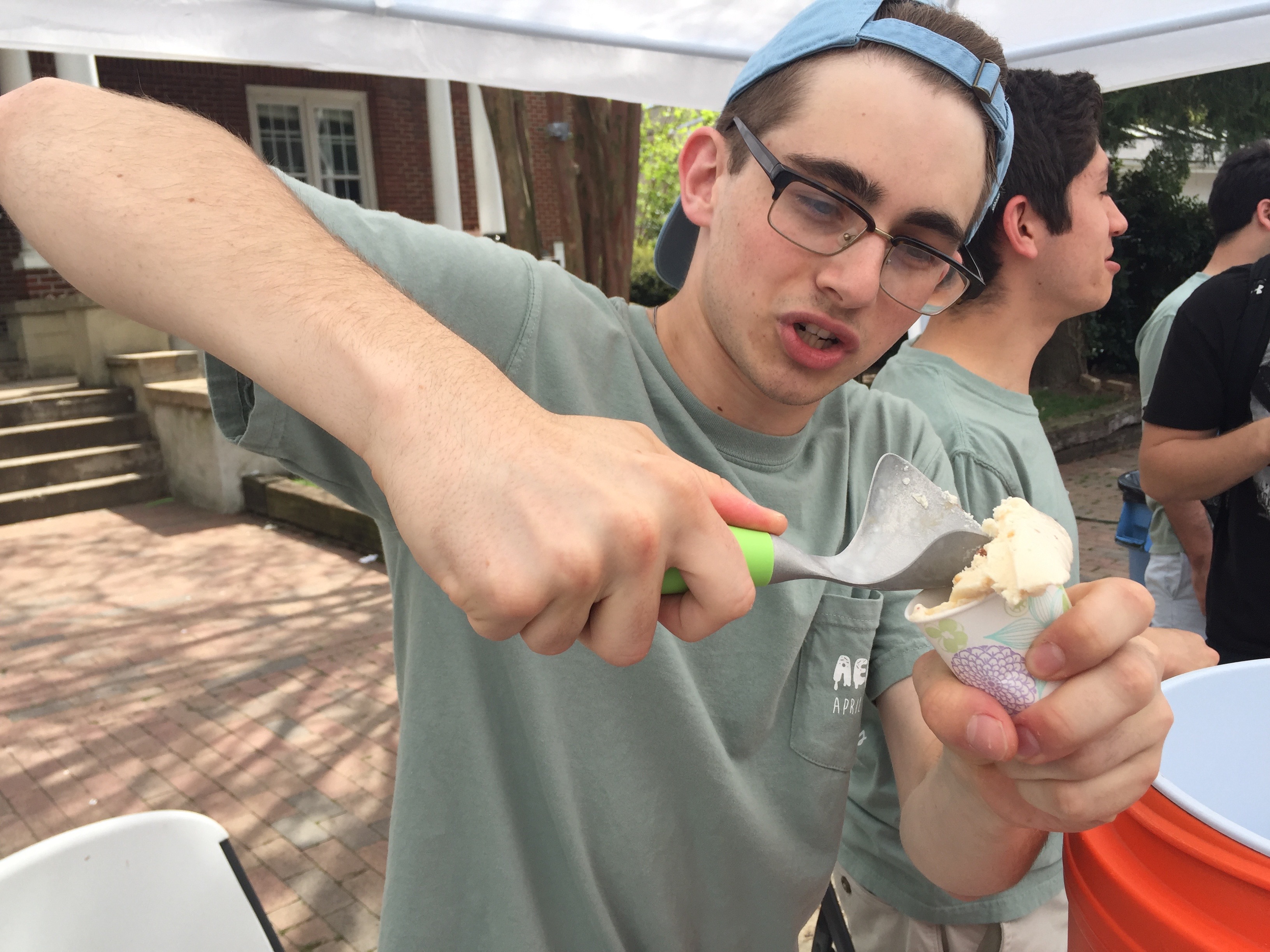