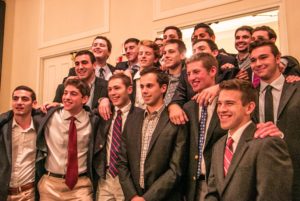 Brotherhood, networking, philanthropic activities, social experiences and everlasting memories are some of the countless reasons to join a Greek organization like Alpha Epsilon Pi.

Here are some statistics about fraternities and sororities:

* Greeks make up 3% of the population in the US
* All but two US Presidents since 1825 have been fraternity men.
* Over 75% of US Congress members were in fraternities or sororities
* Over 85% of Fortune 500 executives are Greek
* 76% of the US Senate is Greek
* More than 7 million men and women in the US and Canada are Greek
* 71% of Greeks graduate while only 50% of non-Greeks graduate from college
* Of the nation’s 50 largest corporations, 43 are headed by Greeks
* Since 1910, 85% of Supreme Court Justices have been Greek
* Over 85% of the student leaders on 730 college campuses are members of the Greek Community
* The entire Greek-letter system has over 20,000 chapters
* Seven out of ten people listed in “Who’s Who in America” are Greek
* 63% of all Cabinet members since the year 1900 have been Greek
* The overall Greek GPA is higher than the overall collegiate GPA in the US